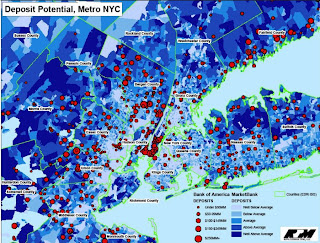 The new BranchInfo update is now available, and includes locations and ownership as of January 2011 and deposit balances as of June 30, 2010.   As always, it includes years of deposit history trends, mergers and acquisitions, closures and consolidations, dates opened, facility type, and more.  For this release, we have improved the geocoding even further for previously hard-to-match locations.
But best of all, we have added a lot of new value. And how did we do that?  Well, with geoprocessing, of course!   We measured the relationship of branches to each other and to market potential, and added that back to the branch layer.
The result is that BranchInfo 2011 now contains additional metrics that are useful for quickly evaluating a branch's - and an entire network's - market potential and competitive environment.  This includes the addition of many new variables, including deposit potential, loan potential and investment potential; and the degree of competition in terms of branch density and concentration.
How can we use the new data?  We can relate deposit performance to the degree of competition and the amount of market potential, and analyze that in terms of all other branch characteristics; and do so both from within BranchInfo (like facility type, date opened and ownership changes) and among primary branch site and location characteristics like signage, business compatibility, parking and access.  Just click on these links if you missed our 101 lecture on this, Blind To Site I and Blind To Site II.
And that is key to placing resources where they will do the most good.  So you can dominate where deposit performance and potential are high and competition low; target where deposit performance is lacking but potential is clear and competition not overwhelming; maintain where deposits are OK but potential is weak and/or there’s too much competition chasing too few dollars; and just plain avoid everything else.
We’ll be sharing a lot more about the new BranchInfo 2011, and how banks are using it, in the coming weeks.
Add: Speaking of sharing, BranchInfo 2011 also includes the share of deposits among branches within one mile for each branch we could accurately estimate, which is the vast majority of all U.S. branches in the 50 states.
Posted by Steve Lackow at 4:53 PM No comments:

Forrester Predicts 1 in 5 Will Use Mobile Banking By 2015

Perhaps what is most interesting about Forrester Research's US Mobile Banking Forecast, 2010 To 2015 is the idea that there is vast potential in getting those who do not bank online with a PC to do so with their smartphone.  While most mobile banking programs seek out active online adults, far more adults currently own a cell phone and use it daily than access the Internet on a PC, and it is here where there is more potential to both add value for customers and reduce delivery costs for the bank.

Forrester reports, however, that Gen X and Y will be the drivers behind mobile adoption.  “Gen X adults (ages 31 to 44) today make up 39 percent of U.S. mobile bankers —the most of any generation... when combined with Gen Y users, the two account for more than three-quarters of all current mobile banking users. By 2015, Gen Y will surpass Gen X and will make up 44 percent of U.S. mobile bankers. These two groups represent the present and the future of mobile banking.”

To get to that one in five US adults, banks will need to do a lot more.
1. Introduce innovative new features, like mobile remote deposit capture, not commonly available through other channels.
2. Optimize existing functionality to offer superior user experiences through the mobile channel.
3. Leverage the unique capabilities of mobile devices and the mobile channel, particularly location based services.

The real ROI from mobile banking will come from engaging the 40% of US consumers who today do not bank online. As Forrester notes, today's online banking functionality won't get it done.
Posted by Steve Lackow at 2:20 PM No comments: 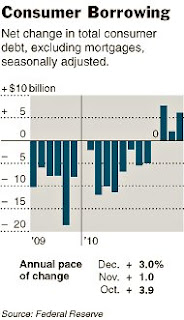 We all felt it this Holiday season - enough already.  We're going to celebrate.

And celebrate we did, as we hit our cards Big Time.  Retailers had their best holiday shopping season since 2006.  And today, the Fed confirmed for us that we experienced the first increase in credit card use in over 2 years in December. Credit card outstandings rose 3.5 percent, and on auto loans increased 2.8 percent.

How important is this?  Very.  Consumer spending accounts for 70 percent of domestic economic activity. 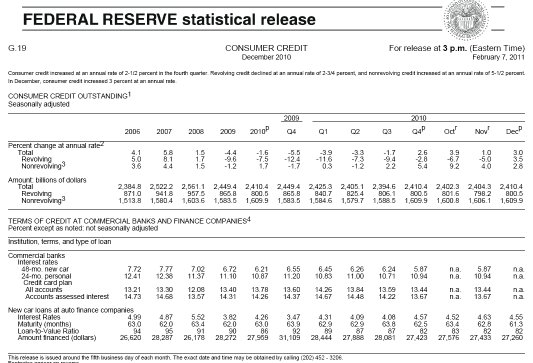 Add this news to those burgeoning 401Ks riding a market rally, and we can expect consumer confidence to continue to rise.  But it will never again be fueled by 20% or more year to year gains in the value of our homes.

Implications?  We expect a renewed wave of balance transfer marketing by the likes of Cap One - and robust retirement savings season for non-traditional and self-directed, as the savings rate continues at levels far higher than before the Great Recession despite all the borrowing.  Has reality set in?  Good.  Now that our household budgets are more realistic, maybe public ones someday will be, too.
Posted by Steve Lackow at 4:22 PM No comments: