Riding On The Metro 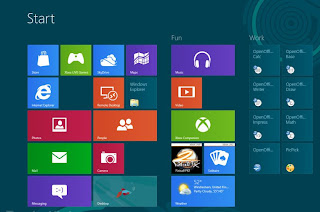 The Consumer Preview of Windows 8 has been out for a few weeks now, and you really should download it yourself and check it out.  Don't let it overwrite your Windows 7 or earlier, though, because you will end up having to buy Windows 8 whether you like it or not.

But.  The bottom line remains, this is a touchscreen and tablet release with the desktop bolted underneath, and while novices and Apple users and mobile users and those who love clean design will love it, business and Windows users probably won't.  Because while it does let you get at things you really need more quickly via Metro tiles, it does not offer much to the traditional desktop user, and the removal of the Start button is going to throw some people for a loop - and there is no way to hack it back, as there was with the Developer Preview.  And since it works differently whether you are using touch (it's all about edge gestures) or mouse (it's all about corners), this might prove confusing to some folks, almost like using a schized-out OS.

On the plus side, those who saw the Developer Preview from last September's BUILD conference will find the horrible green background gone, and apps here that are much more polished and closer to prime time (if such a metaphor even holds any more, especially for this audience!)  and, for those of us who love keyboard shortcuts, those are there - Ed Bott points out a few of the most useful, of which I find these most key (pun).

Should you be riding on the Metro?  Or are you a smitten desktop lover feeling caught on a track that goes only one way?

More soon on how ArcView, Business Analyst and other ESRI apps install and perform on W8.


Posted by Steve Lackow at 3:23 PM No comments: