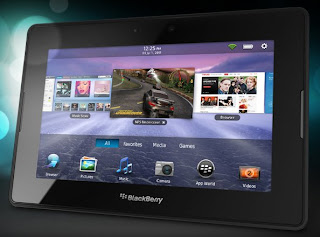 Quick - what do Chase, Lloyds of London and Morgan Stanley have in common?

They have all integrated iPads into their enterprise networks.

As Android phones become ubiquitous and come to dominate the market, tablets are a completely different issue.  Until Android becomes a secure platform, the iPad and the soon to be released BlackBerry PlayBook (pictured left) will dominate whatever enterprise adoption occurs, possibly over the next couple of years.  Android tablets will find their place in business, but won't be enterprise ready for A-while.

Never before has user adoption of a mobile device challenged corporate IT as fast and as broadly as the iPad has.  As you probably know, Apple is as surprised as anybody and can't manufacture nearly enough to meet the demand.  And they are definitely finding their way to work - new Forrester research shows one out of four companies using or planning to use tablets.  Are they secure enough to be on a corporate network?  Forrester says Yes.  And so do some pretty big banks.  The early applications are a little weak in terms of justifying hard ROI on iPads, but it's clear that they are a boon to meetings, electronic documents, and field applications in sales and service.

Perhaps the greatest concern?  All those tablets sucking a mobile bandwidth that is not designed for, and can't accommodate, tons of fat content; and extending reach via Wi-Fi is not cheap.  What to do?  Well, enterprise users, enjoy all your YouTube and streaming video over wireless networks now, because we will be locking it all down before you know it.
Posted by Steve Lackow at 1:08 PM