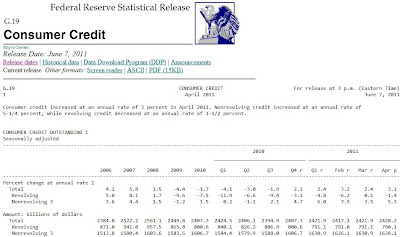 There has been a lot of media attention on this decline, and a lot of misinformation, with many reporting that "consumers are pulling back on credit card spending again."  This is because the fact remains, revolving debt dropped for 27 consecutive months from September 2008 to November 2010, and it seems that nobody can wipe that bad taste away. 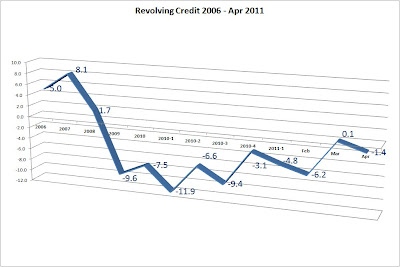 However, it is also evident that revolving credit expanded in November 2010 and in March 2011, and the April contraction was just -1.4% - not good, but well below the levels of contraction we have been seeing.  As illustrated in this chart, the present long term trend looks a whole lot better than anything we've seen since the Great Recession began.

We believe that as political and economic conditions stabilize, we will see consumer confidence and spending begin to rebound.  It is going to take time, though.  Consumer spending, which accounts for about 70 percent of economic activity, rose a less-than-forecast 0.4 percent in April, according to Commerce Department statistics released May 27, as increases in fuel costs started to show up everywhere, especially in food prices as well as gas prices.

It is those fuel price increases -which affect everything that is transported - that remain a threat to stag-flate us.  But as we see gas prices relaxing now in June ahead of the peak summer travel months, and forecasts for planned consumer travel seem to have been little impacted based on TripAdvisor data (showing 61% of Americans say their travel plans will not be impacted at all by gas prices), we think people are going to travel and spend this summer - perhaps especially because times have been so tough and we all feel like we deserve a little vacation.
Posted by Steve Lackow at 3:55 PM