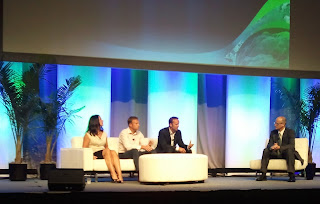 Last week's ESRI Business Summit was, for the very first time, visualized and presented as a business conference rather than a GIS conference.  This reminds me of how Economy.com conferences are about business not econometrics.  What is critical to my business here?
Clearly, the answer to that question, at the Business Summit, and the broader ESRI User Conference, is the power of place.

Jack Dangermond was particularly compelling and inspirational this year, opening the conference with an explosion of applications from all over the globe and all over the chart, one positive "game changer" after another after another.
Timothy and Michele Schilling astounded everyone on Monday afternoon with their tale of improving the income of Rwandan families tenfold in a decade by using GIS to process and market Rwandan coffee (broadly available under the Community Coffee brand in the U.S.)  All of these presentations underscored doing good and doing well, the role of private for-profit companies in creating social as well as economic wealth. 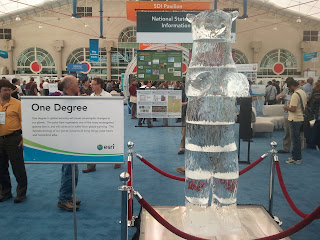 Jacqueline McGlade of the European Environmental Agency talked about the private citizen's role in climate change, and was very moving and inspirational as well.  Just One Degree = catastrophic climate change, but just one person can act.  Jane Goodall's Roots and Shoots, same deal.
At the Business Summit, Warner De Gooijer of Cisco (video) gave a great, clear explanation of how Cisco uses GIS as the backbone of their supply chain through which customer parts can be delivered anywhere in the world, from the closest warehouse to the needy customer, in within as little as two hours.  In the same set of discussions, Nigel Davis of Willis Re (the insurance companies insurance company) talked about using crowd sourcing information from social networks like Twitter to help evaluate and manage risk and losses in a disaster.  And Michelle Ellington of the University of Kentucky showed the history of facilities management at the university from paper maps to digital GIS, all the while using the process as a tool to bring stakeholders together.  When I asked the panel for a model of how GIS developed in their organizations, they all agreed that find a senior manager champion, build strong GIS staff with interpersonal skills, and architect solutions as close to the heart of IT as possible were the keystones.
Earlier, Matt Mikula of Edward Jones provided a glimpse of the history of GIS usage at Edward Jones that was somewhat like Michelle's, but with the usual reticence towards fundamental systems changes at many financial institutions - where it's usually best to be second and allow someone else to be bleeding on the edge, and where IT is often tasked with wiring together different generations of technology that ends up looking like something out of the movie "Brazil".  Another Matt, Matt Felton of MacKenzie Commercial RE, was as enthusiastic as anyone in recounting how he makes GIS relevant to a large number of very different people and functions in his organization.  Genial Pat O'Hagan of Starbucks, who has become a fixture at this conference, was as helpful as always in explaining how Starbucks puts GIS - and business intelligence - to work.

RPM did its part by participating in the Map Gallery - which everybody should do, and also bring guests and family to the Reception on Monday night.  And, Elio stood fondly by as our longtime friend and RPM client Scott McClymonds of ARVEST Bank won a SAG Award for Special Achievement in GIS.  We began extending and enhancing the customer database using GIS with Scott in 1993.

In short, this was the best conference since the economic downturn and pone of the best ever.  With 15,000 attendees, it was also the largest..
Posted by Steve Lackow at 4:51 PM