The answer is, perceptions of customer service and value of the overall brand may absolutely impact store attractiveness - in fact, GIS analysis suggests they can make all the difference. 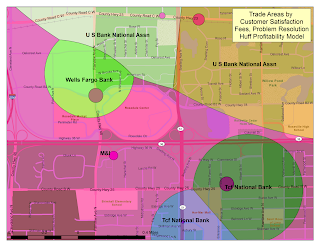 Here's a little market in Minnesota, but it could be your neighborhood.  There are four banking competitors and six branches here in the space of about 1/2 a mile - US Bank with two branches to the north, TCF Bank with two to the southeast, and Wells Fargo and M&I with one branch each towards the west.  Using customer perceptions of Overall Satisfaction, Reasonable Fees and Easy to Resolve Problems from the most recent JD Power Retail Banking Study for this region, we assigned the JD Power scores for each bank to each of its branches.  Then, we ran a very basic Huff model based on these perceptions, at left.

The analysis shows that M&I will be able to successfully compete in this market with a much smaller office, and just one office, because the perceived service quality and value are attractive enough to have influence throughout the entire southern portion of the area.  To the north, US Bank benefits from having two offices with better perceptions than either Wells or TCF, and dominates the entire northern area. 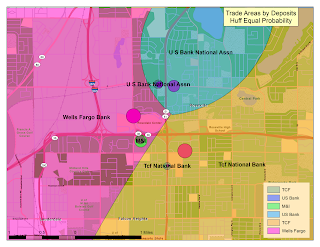 Based on deposits, which with date opened and several other factors is usually considered a key factor of attractiveness, we would expect something entirely different, depicted to the right in a model based purely on deposit size.  M&I is overwhelmed in this analysis, by the large Wells branch, the two TCFs including one large office, and the two US Bank locations. 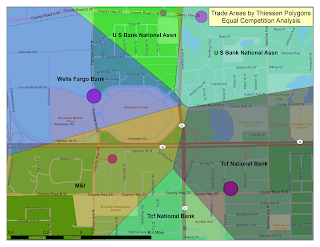 Looking at the same neighborhood by equal competition or Thiessen analysis, where equidistant lines are drawn between each branch and its adjacent branches, this tends to flatter the institutions with multiple branches (left). 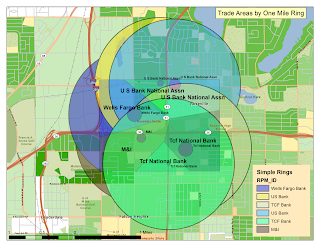 Simple rings tend to flatter the multibranch US Bank and TCF even more, as they dominate the market to the north and south, respectively. 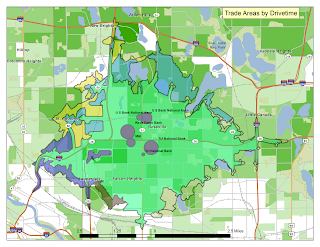 Meanwhile, drivetime polygons tend to depict a lot of overlap, given the immediate proximity of all the offices to a single, main intersection.

Hardly definitive, but food for thought.  To what extent can perceptions of good customer service and value overcome weaker convenience and ease of access, and how do we model it in GIS?  By the way, that is RPM's MarketBank potential for deposits as the underlying theme, the greener the better.
Posted by Steve Lackow at 2:30 PM