Most bankers know Payday loans as very short term unsecured loans sometimes timed to match up with the borrower's paycheck issuance. However, many banking professionals do not think of payday lending as a potential source of fee income for financial institutions.

When done right, with the right channel, at low cost - as at Walmart - payday lending can add a contribution to profitability and customer value.

But when it is done wrong by payday lenders, it is not very sweet.

Although in the hands of some lenders payday lending can be predatory and test the limits of usury, when implemented ethically it can also present retail community banks with an important new opportunity.

While charge-offs and losses have been reported as high as 20% on these loans, and the small loan amounts incur the same processing costs as far larger loans, there is still a gap between what payday lenders charge and what a Walmart charges that is large enough for a community bank to drive a Brinks truck through.  Does a $15 charge on a $100 14-day payday loan seem reasonable?  That represents an Annual Percentage Rate of nearly 400%, and drains low income communities.  In California, the legal APR is even higher, an amazing 459%.  (For the statutes in your state or states, check the National Conference of State Legislatures).

Payday lending is legal and regulated in 37 states, but it is important to note that under the Dodd–Frank Act, the Consumer Financial Protection Bureau now has specific authority to regulate all payday lenders, regardless of size.  Count on Fair Lending Risk attributable to payday lending to rise significantly this year.

According to a study by the Pew Charitable Trusts, most payday loan borrowers are white, female, and are 25 to 44 years old. However, after controlling for other characteristics, Pew reports five groups that have higher odds of having used a payday loan:
In another study by the Division of Research of the Federal Reserve System and the Financial Services Research Program at the George Washington University School of Business, 18% of payday borrowers had an income below $25,000, 41% earned between $25,000 and $50,000, and 39% reported incomes of $50,000 or more.

But most definitively, the Federal Reserve Board uses the Survey of Consumer Finances to define who is using payday lending services.  The FRB began collecting data on who uses payday loans in 2007, and examined it in the FRB Bulletin in 2009.

We now have several sets of data to evaluate.  As is the case with many financial services, age and income tell the basic tale.  The age of borrower is one primary determinant, with usage of payday loans clearly highest among those Under 35, while the usage by those 65+ is, essentially, zero.

Similarly, the lower-income cohorts dominate usage, while the top cohorts are absent.  Net worth is also a tell, to use the poker term, with the percentage of families with median or above net worth who use payday loans essentially zero as well.

RPM uses raw FRB data from the SCF to develop demand and potential surfaces for the U.S. (for a bit of alphabet soup) using an array of these and other select demographic and geodemographic variables.  The resulting Payday Lending Demand and Potential is included in the RPM MarketBank: Delivery Systems package (which also includes debit card and branch usage surfaces, among others).

Using the new Delivery module of RPM MarketBank, and ArcGIS Online, RPM has created an interactive demand surface for Payday Lending for the U.S. (above).  Here is how we did it, how we added branch locations, and applied this ArcGIS Online solution to show a sample client bank how to enter and serve an under-banked market and profitably undercut the payday lenders.

For this example, we will assume that a banking client is interested in exploring a potentially under-banked neighborhood in Seattle called North Park.  The objective of this example is to better understand the potential demand for payday lending in North Park.

This might not look like much to a lot of people, but I've been waiting for push-button mapping for a long, long time.

The client's question is about Seattle, WA - so we'll enter Seattle in the search bar, and navigate right to a Seattle base map of my choice, including imagery.  And again, quite frankly, what ArcGIS Online is able to do, as easily as it it does it, is not something that I ever anticipated.

The client is interested in an under-banked neighborhood in Seattle called North Park, and has a spreadsheet of branches already in the general area.  This spreadsheet is based on RPM BranchInfo 2014, which contains national competitor branch location data and over 10 years of history for approximately 95,000 bank branches.  But you could use any list of addresses saved as a comma-delimited file (.CSV) in Excel.

And, just drag the Excel address list from its folder in Windows...

drop it on the map,

tell ArcGIS Online which columns have the address information...

Once added, ArcGIS online will automatically draw the branches on a street map.  Didn't see this one coming, either.  The map symbols are a little hard to see, though.  And since we're using BranchInfo, we'll also take the opportunity to visualize them based upon their 5-year deposit growth histories. 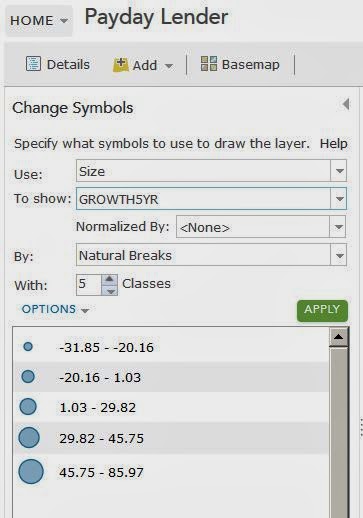 So, let's do that, by clicking on the down arrow for the North Park branches, and using Change Symbols to portray them by 5 year growth (GROWTH5YR).  This way, the fastest growing branches will appear the largest on the map.  The result is the map below, that shows that there are a number of branches surrounding, but not in, North Park.

A little street-pattern analysis of the resulting map (below) shows that the branches growing the fastest over the past 5 years are predominantly in one corridor.

This corridor connects the branch cluster in the lower left along Hofman Rd NW, becoming NW 105th St., which then becomes N. Northgate Way and finally NE Northgate Way on the other side of I-5, where the other cluster of branches is.

Now, we are ready to bring in the Payday Lending demand from MarketBank.  Since the client is interested in other Fair Lending aspects of branch placement for payday lending, we are using the RPM Lendfair dataset, which is already a hosted feature service on ArcGIS Online and contains the Payday data from MarketBank. 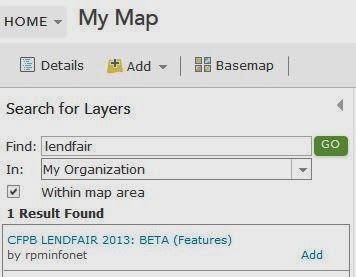 We simply use Add and Search for Layers to add Lendfair from My Organization (but soon, everyone will be able to access a basic version of RPM Lendfair).

Then, in a process similar to what we did with the branches above, we use Change Symbol on the Lendfair layer to select and map the Payday Lending Demand.

The numeric Payday scores are indexes, with a value of 100 being equal to the U.S. average.  The darkest red areas (scored 129-207 in the map legend) represent Census block groups from 29% to 107% more likely than average to have used a Payday loan in the last year.

We now know the general location that will be ideal for an entry into the North Park neighborhood.  It is in an area of high demand, in the key banking corridor, between the two clusters.  This is highlighted in the map above.

Now, we have a very good, quantitative idea of location.  Next, we will see where the payday lenders are, and bring ArcGIS Online with us when we hunt for sites -

Which we'll be covering in a near-future blog post.