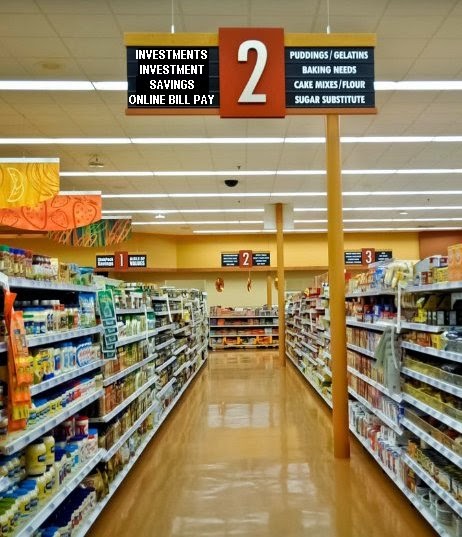 Let's see, we're out of milk, we need pet food, and what are we doing for dinner?  And, maybe it's time to roll that dumb CD into something with a little better yield.

For banks and credit unions, In Store locations can be a good place to cut delivery costs but still have a branch, an enhanced service level, and a place to build brand awareness.  They can also help build product awareness, and represent some perhaps unexpected demand and potential - opportunities - for investment products, financial and retirement planning services, and home lending.

While we are not advising that banks begin doing investment consultations next to the propane rentals, we are suggesting some marketing in the market.

When we began to examine what makes or breaks a branch co-located in a supermarket or store, we expected successful locations to find an attraction for customers who like and use branches - but also like and use alternative delivery, too.

And, we also suspected that what helps make the very largest branches so very large is that they are in dense big-city primary trade areas driven by the presence of significant daytime population - yet are still largely residential.

And, that the reason behind the big branches (and all big, successful retail stores) is underlying potential in surrounding neighborhoods within a short and acceptable drive.  Here, we are talking about underlying investment and investment savings demand and potential, and solid home lending balance potential, which characterize the customers of the largest In Store branches with $50 million or more in deposits.

But, there are surprises.  We did not necessarily expect to find just 3 of 65 Tapestry lifestyle segments - and not the ones you'd think of, either - composing 50% of the primary trade areas of the largest $100MM+ in-store branches.  Or, that the success of a branch would be driven by Renters, not Homeowners.

So, lets take a look at What's In Store.  Where are these branches?  What are the characteristics of their underlying primary trade areas?  What are the key success factors?  And where are they going (literally and figuratively)?


As of March 2014, nearly 5,800 bank branches were located in a supermarket or department store, based on BranchInfo 2014, RPM's updated location database of every bank branch in the U.S., with more than 10 years of deposit, ownership and location history for each branch. 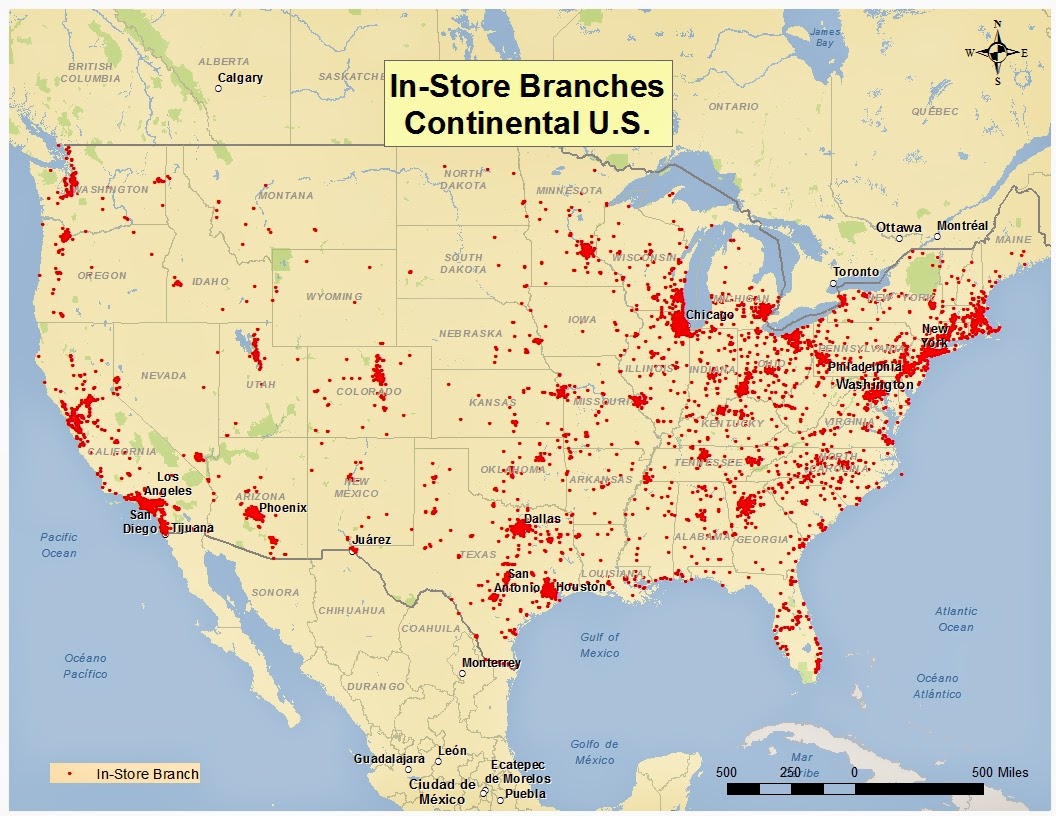 Such co-locations have become very popular in recent years for a good reason.  They are convenient for consumers; they allow banks to augment and extend their networks at a lower cost than acquiring or building, and supporting, any other type of branch; and because there is a real or perceived synergy between the customer or member bases of the bank or CU, and of the merchant/store.

However, in many cases, these in-store branches never really meet the expectations that financial institutions have for them.  Despite their role in boosting overall brand recognition and presence, they largely become a relatively-expensive additional channel for transactions. They never really grow a deposit base; they don't really help generate loans, either.

Where Are The In-Store Branches Today?

Of the 5.781 in-store branches as of March, about 22% or nearly 1,300 are either in Texas (651) or California (634).  Additional states with about 250 or more in-store branches include Ohio, Illinois, New York, Arizona, and Pennsylvania.  These 7 states represent about half (48%) of the 5,781 total. However, as indicated in the map above, the in-store placements tend to be in major metro areas - especially the northeastern seaboard cities from D.C. to Boston; Atlanta; Chicago, Cleveland and Indianapolis; and also Atlanta; K.C. and St. Louis; Dallas, Houston and San Antonio-Austin; Denver and Salt Lake; San Francisco and Los Angeles; and Seattle and Portland.

Where Are The Largest In-Store Branches?

Generally, the largest in-store branches on average can be found in A Supermarket in California - not surprising, since you can already buy just about anything else that you might ever need there. 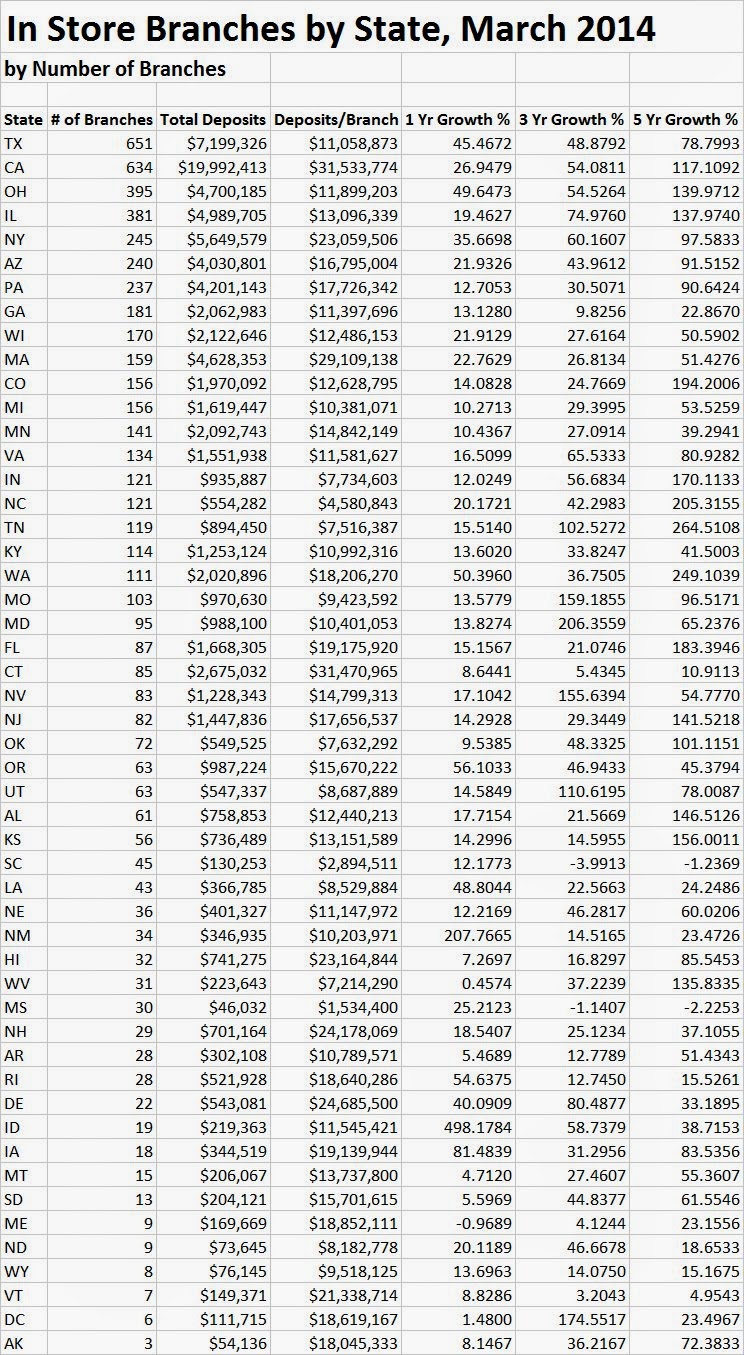 The average branch size for an in-store branch in the U.S. as of March 2014 is $15.7 million - far below the average branch size for all types for the nation (now about $71 million).  But in California, it is twice that ($31.5MM) - with nearly 20 billion dollars at in-store branches.  Texas follows, but at around only $7.2 billion.  The remainder of the top 7 states have between $4 billion and $5.7 billion on deposit at co-locations.

Looking further at average branch sizes, we get a glimpse of where in-store branches may be going - and the New Engand states are clearly among those places.  The in-store branches in Connecticut are about as large as those in California, and recent growth is nothing short of astronomical - expect more.  Massachusetts branches are also around $30MM, and all of the New England states are above the average branch size.

On the flip side, 5 southern states bring up the rear - Mississippi, the Carolinas, West Virginia, and Tennessee have the smallest in-store branches.

Where Are The Fastest-Growing In-Store Branches?

Among the big states for in-store branches, Ohio, Illinois and California have each more than doubled their average branch growth over the past 5 years, and Arizona and Pennsylvania have grown nearly as much - and these will all remain among the dominant states, along with Texas, which is also showing about 75% growth for the period.

Washington, Colorado and Florida are states we have not yet mentioned, but each has an in-store deposit base between $1.5 and $2 billion, and has shown growth since the Great Recession.  Growth in Washington over the past 5 years is nearly 250%, and in Colorado and Florida, approaching 200%.

We also think that opportunities in New Jersey are already significant, and will follow the overall New England trend towards more, and larger deposit, co-locations.

Now, let's specifically look just at where the branches over $50 million in deposits are.

Location of In Store Branches Over $50 Million 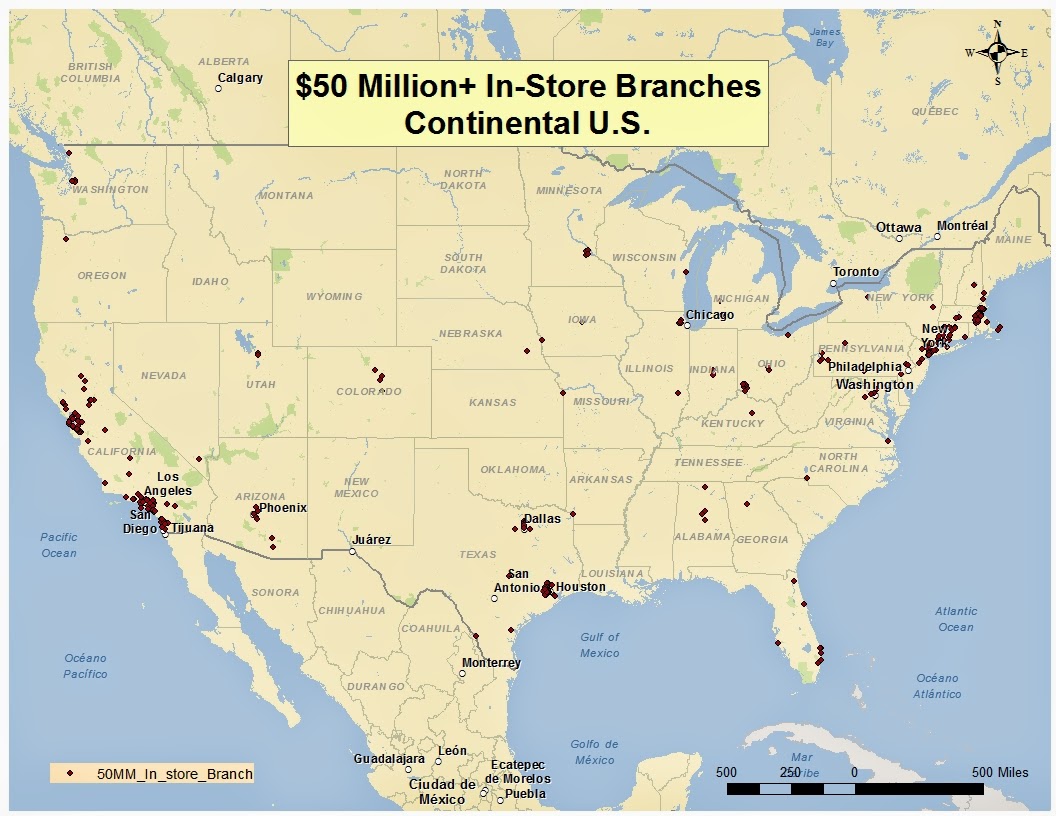 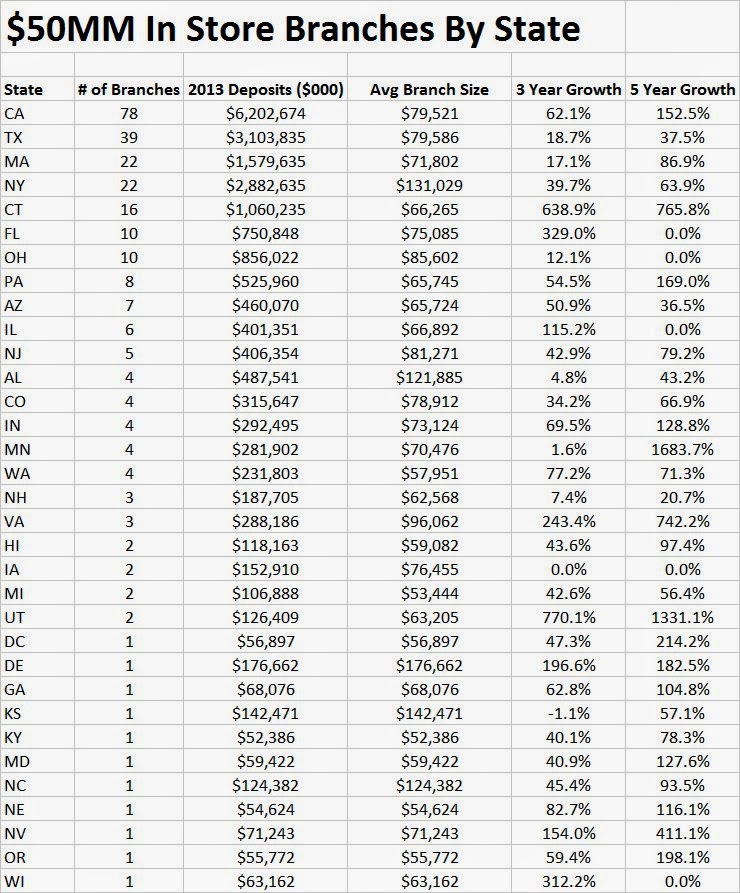 The map tells the tale - as it so often does.  Of the total of 268 branches that are In Store and $50 million or more in deposits, California has by far the most in-store branches over $50 million (78), followed by Texas (39).  The big New England states (New York, Connecticut, Massachusetts) have a total of 60 branches - including the largest average branch size among the top states (over $131 million) in New York (driven by the most successful In Store branch in the U.S. by far); and some astronomical growth in Connecticut as well, where the branches in this deposit class are 6 or 7 times as large than they were just 3 to 5 years ago.
These top areas - California, Texas, and the big New England states - comprise about 2/3 of the $50MM+ class branches (177 of the total of 268 $50MM+ branches nationally or 66%).

Also notable - Florida has 10 branches $50MM+ (as does Ohio), and like Connecticut is growing fast (with In Store balances over 3 times what they were in 2010).

Location of In Store Branches $100 Million or More 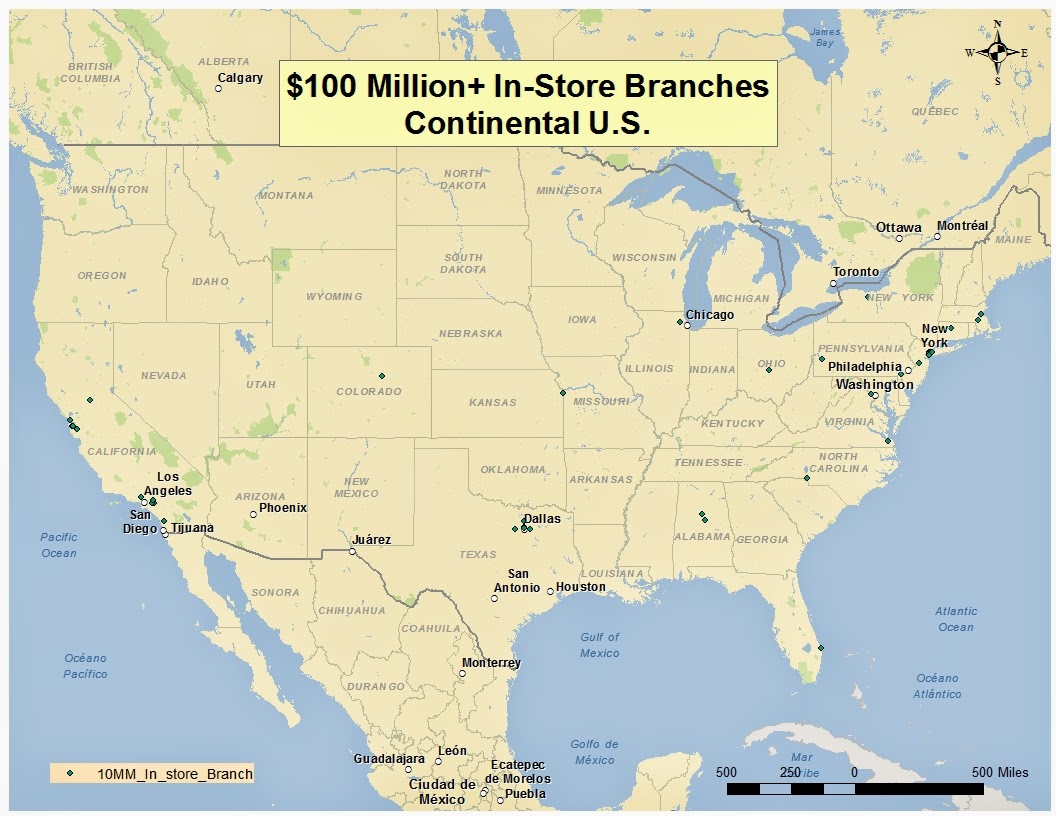 It's no surprise that only a very, very small number of In-Store branches nationally (37) have deposits of $100 million or more. 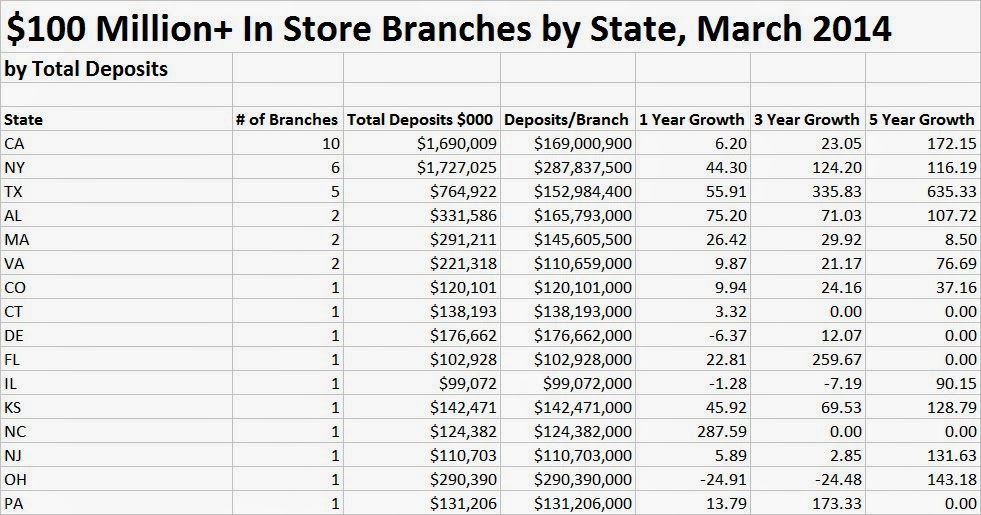 Ten of the 37 largest are in California, and 7 of the 10 are Wells Fargo branches, with 4 of those seven in the S.F. Bay Area.

Texas now has 5 of these largest $100MM+ branches, and these branches have grown deposits like weeds, with deposits more than 6 times what they were just 5 years ago.

The total for NY is bolstered by the truly mega-sized Amalgamated Bank branch on Union Square in Manhattan, a nearly 3/4 billion branch that represents about a third of that bank.  It may also be an important reflection of what may be the ultimate success formula for an In Store branch, which we'll discuss below.

Among the other states, Alabama pops up in this analysis for the first time, with some growth in these big branches; while those in Ohio and Illinois may be losing a bit of ground.

Among other banks, US Bank and TD Bank each have 3 or 4 of these branches, and Chase has two (one on each coast), along with RBS Citizens (one of which is a Starbucks co-location) and Bank of the Ozarks (Texas).

Now, let's take a look at the composition of the primary trade areas surrounding In Store branches, based on what most customers tell RPM is a reasonable and convenient drive to their primary bank - about 5 minutes and definitely less than 10 minutes. 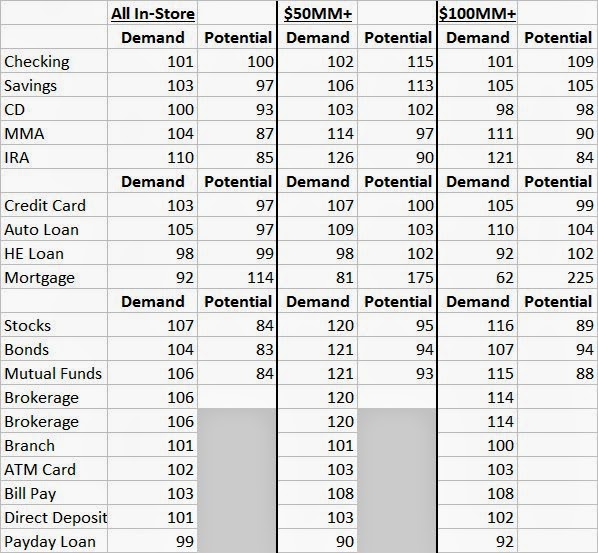 Overall demand across financial products (who needs and uses the product or service) tends to be slightly above average for All In-Store branches (U.S. average = 100).  This is led by demand for IRA (110) which is about 10% over the national average.

Delivery system usage is average or slightly above, and evenly balanced.

With the exception of CDs, demand for investments and investment and retirement savings is well above average.

And while mortgage demand is below average, mortgage balance potential is strong, some 75% above the national average.

Potential for Checking, CDs and Savings balances is also a bit above average.

As for delivery systems, reliance on ATM/debit (103) and particularly online Bill Pay (108) nominally exceed usage of branches (101).  This apparently small difference is actually quite telling - because whenever alternative delivery scores exceed branch scores, it's noteworthy.  It represents the potential for even greater delivery cost savings for the co-locating bank or CU.

Demand and potential for the mega branches are similar to the $50MM+ branches, with mortgage potential very strong indeed at over twice the national average.  However, scores tend to be lower than among those branches $50MM+ - and when we investigate the characteristics of the trade areas (below), we'll have a good idea of why this is so.

Delivery systems usage tends to track with the $50MM+ branches. 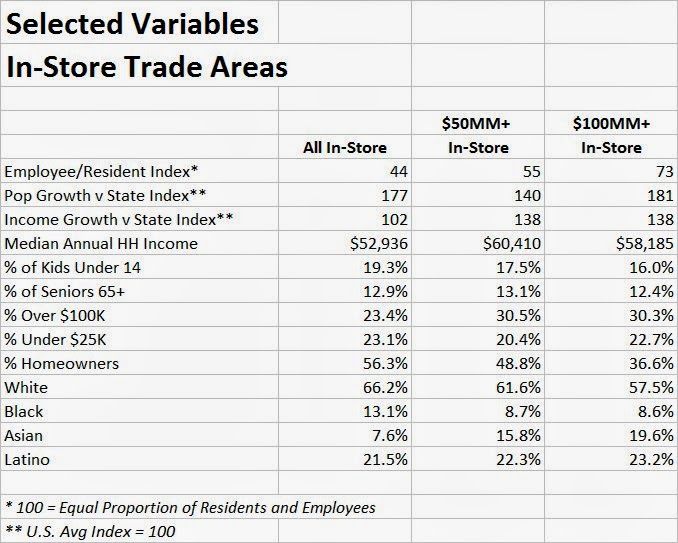 Renters more so than homeowners, more daytime population in largely residential areas, income and income growth, and the presence of Asian and Pacific Islander population are all characteristics of the largest In Store branches (those $50MM+ and $100MM+). 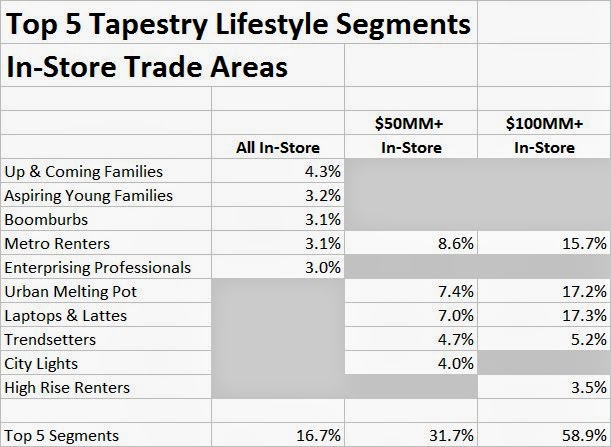 Using Esri's Tapestry lifestyle segmentation, we find that the lifestyle distribution within the PTAs of All In-Store branches pretty much resembles that of America as a whole, with the top 5 segments comprising only about 1 in 6 households (16.7%).
The PTAs of the $50MM branches are much more homogeneous.  The top 5 segments account for about 1 in 3 households in the $50MM+ category, and reflect metro city residence (see below) and the presence of lifestyle segments in Tapestry's Solo Acts Lifemode grouping of segments.

However, the PTAs of the mega branches are highly homogeneous, featuring just 3 segments - Laptops and Lattes, Urban Melting Pot, and Metro Renters - that comprise half the lifestyles in the PTAs of the largest $100MM+ branches.

Now, let's complete the profile with a look at Urbanicity. 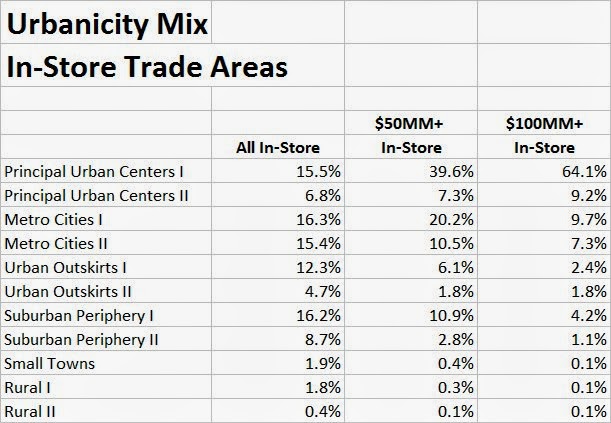 These locations tend to be in metros but not in the city center - nearly half (49%) of All In Store branches are in Metro or Urban Outskirts locations, where the density of resident and, increasingly, daytime population translates into relatively large primary trade area markets.  But, fewer than 1-in-4 are actually in the highest-density Principal Urban Centers.

Better underlying retail demand and potential (especially for investments and mortgages) among the $50MM+ branches sets them apart from the largest $100MM+ locations.  For these mega-branches, the size of branches is more driven by commercial potential in their largely Principal Urban Center locations - especially where these are gentrifying.

That Amalgamated Bank on Union Square in Manhattan is probably the best single example of how to succeed with an In Store branch.  There are lots of upscale renters with growing incomes (and also plenty of High Society lifestyles, too) immediately nearby, in Manhattan-type density, with strong workaday daytime population, great mass transit possibilities, and great, traffic-generating, high turnover retail that the bank benefits from.