The 2014 Esri Business Summit and the annual User’s Conference was one of the best ever.  And for Banking, it was truly a breakthrough year, with many of the top banks in the U.S. and throughout the world in attendance.

Jon Voorhees, SVP of Retail Distribution at Bank of America - and an old RPM friend and Northridge colleague - gave one of the most informative, entertaining, actionable, and data-centric presentations ever given at the Summit (OK, so he's our pal, so what.).  Jon leads the retail distribution execution team at B of A, where he’s responsible for the execution of all retail distribution programs impacting nearly 9,000 banking center and ATM locations.  Jon’s group consists of about 100 users nationwide, predominantly working from home to help re-configure branch network locations and sites.

Jon has been a leader in the effort to resize and transform the Bank’s large distribution network, and what he had to say about where branch banking is headed was transformative.  Jon described – or rather, proscribed – that there will be “no single format for the Bank of the Future”.  Jon defined several of the branch types that the Bank will be creating.

Flagship.  Each of the Bank’s Top 15 markets will have a Flagship branch, a contemporary full service approach staffed with full time specialists.
Enhanced Banking Centers.  These branches will have 2 or more specialist full-time, but will also feature and rely on a good deal of digitally delivered content.
Standard Banking Centers.  These are the traditional branches, with specialist coverage defined by market needs and usage.
Express Centers.  The Express Centers will have no tellers – transactions will be strictly automated, allowing the branch to concentrate on sales and service, again fine-tuned to the market.
Remote ATMs and ATAs.  The Bank appears to be among the most successful at placing off-premise machines, and adding ATM assist technology that incorporates Teller-on-Demand, including the ability to be served on-demand in Spanish.

Jon also discussed some of the innovations inside, like Teller Assist – and the Bank’s successes with reconfiguring branches.

What does this have to do with GIS?  Well, Jon’s colleague Carlous Brown, the Vice President for Distribution Market Planning at Bank of America for the Southeast and California, spoke to this quite eloquently in the following presentation.  Carlous’ talk, “Thinking Spatially at Bank of America”, further elaborated upon the change in branches from “high volume to high value”.  The future requires fewer physical locations, but greatly enhanced, convenient access to specialists.  Carlous described the inherent challenges and the need for retrofitting, downsizing, relocation, etc. and the key role that spatial analysis plays, as the bank moves towards a smaller physical footprint (Jon mentioned a reduction to under 5,000 branches by year-end) and a hub and spoke system that more efficiently distributes resources. 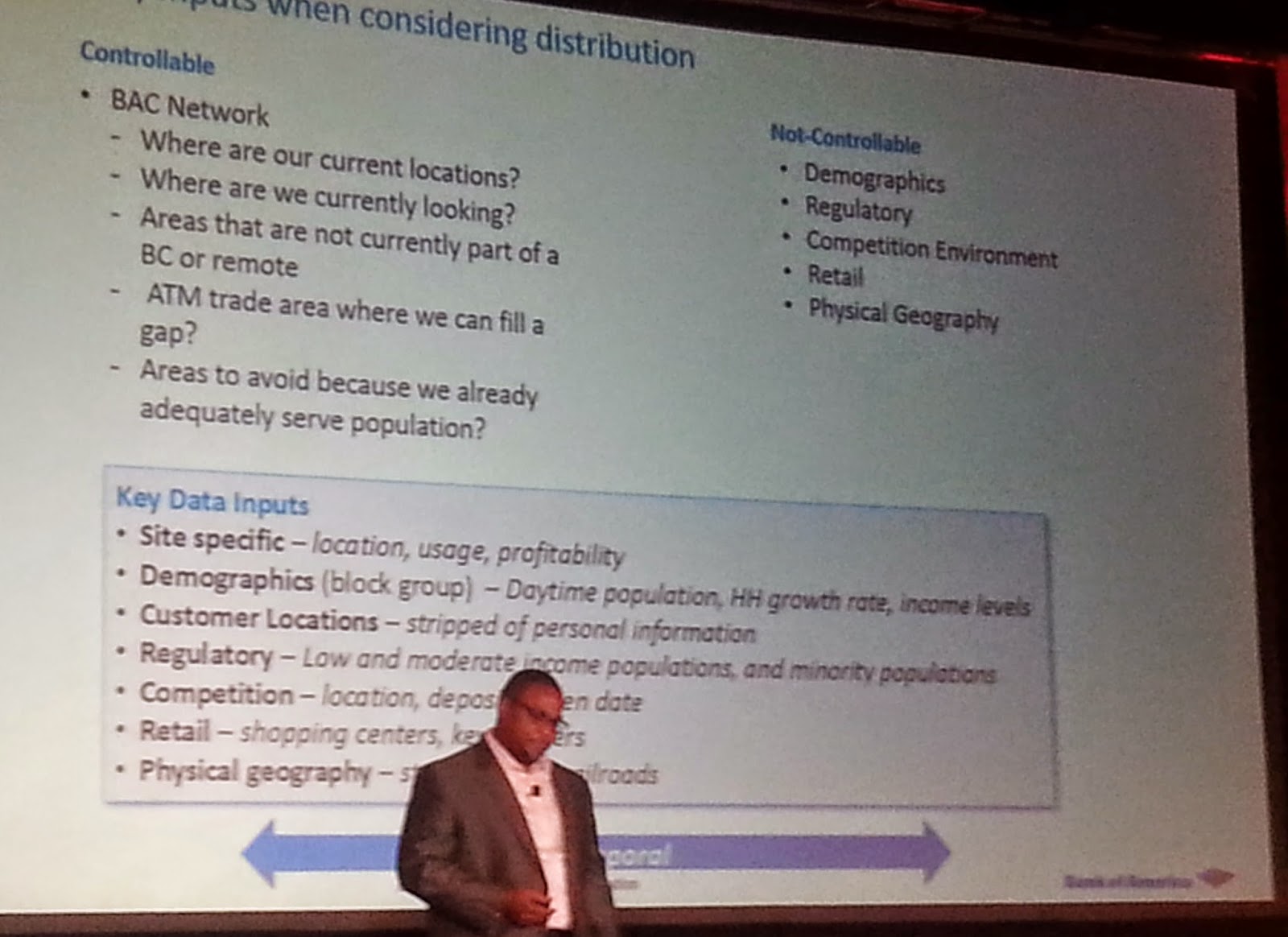 In fact, Carlous mentioned spatial analysis as a key underpinning of most everything that the Bank is doing.  As an underpinning to strategic distribution planning, he described “Controllable” (where are our current and prospective locations, where are we saturated, etc.) and “Non Controllable” factors (demography, regulatory, etc.), and described in detail all of the key data inputs to distribution strategy. 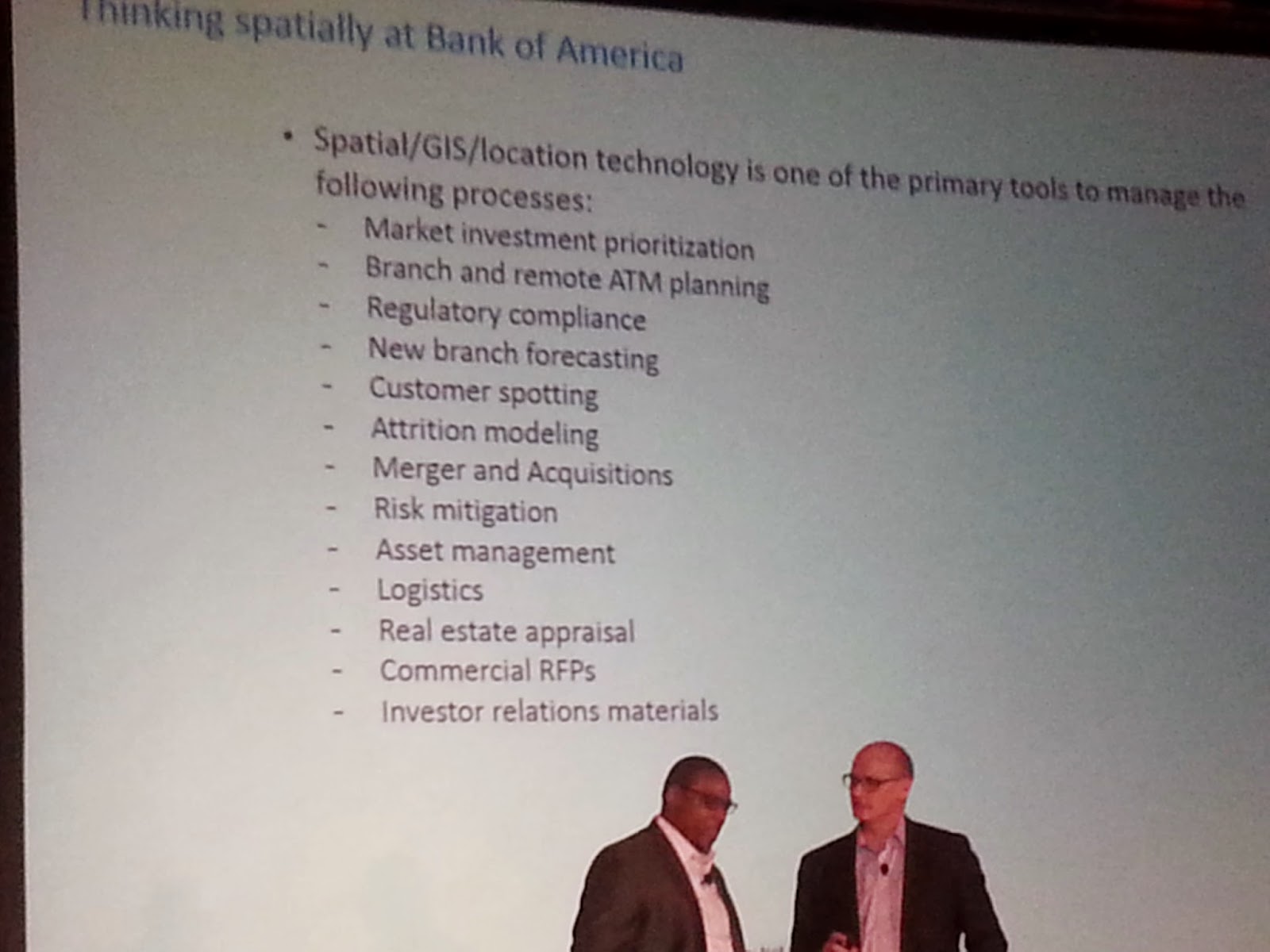 Carlous also described how seminal GIS has become to virtually everything the Bank plans and does, supporting all of the following processes:
It’s easy to see why we thought this was one of the best of all Summit presentations in the dozen or so years that the Summit has been held.  When online resources become available from the Summit, we’ll pass all of the links along. 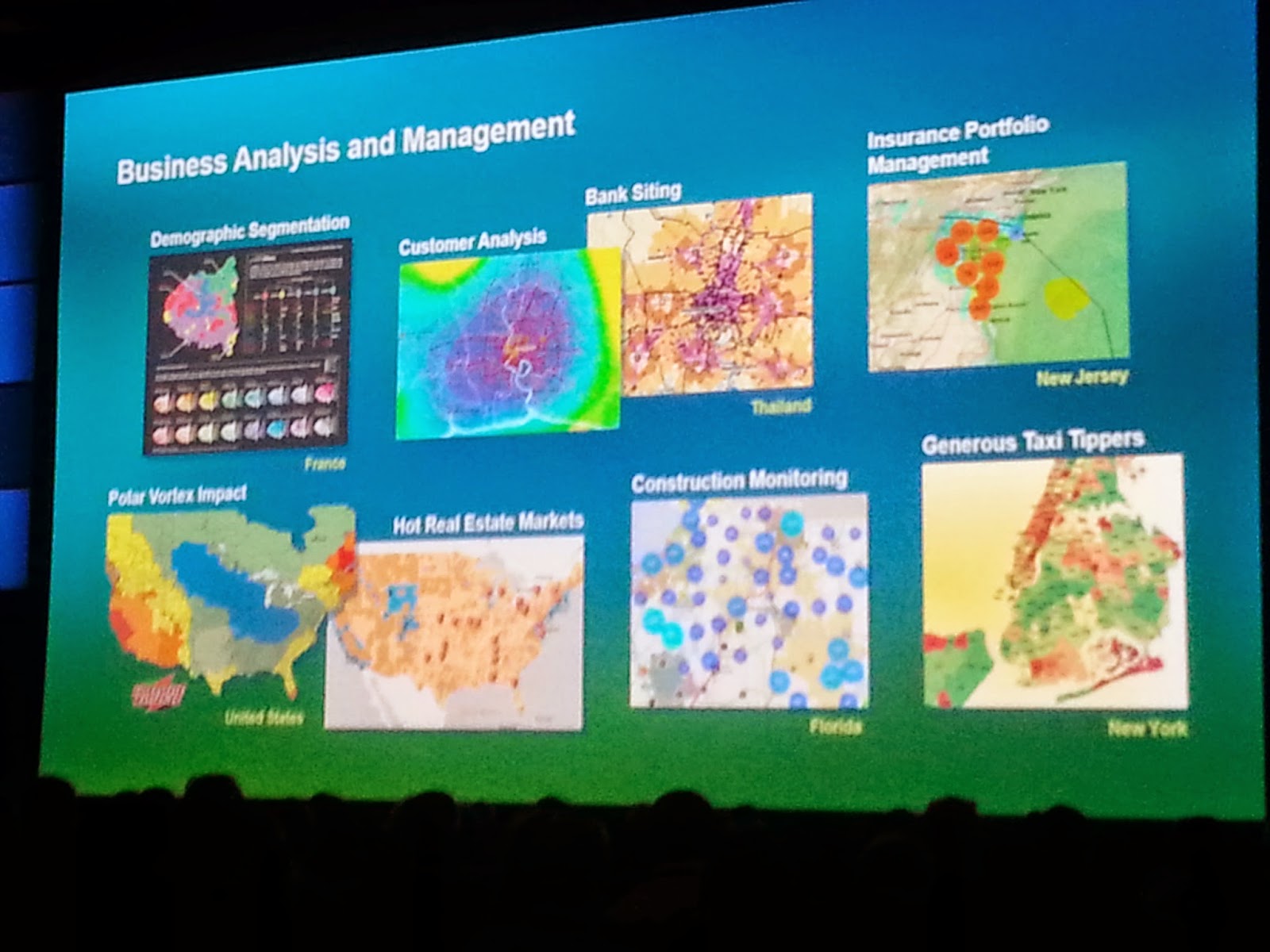 Even before the Plenary began, RPM’s new Unbanked map and dataset from the new Living Atlas of the World was prominently featured as one of the slides on the giant central screen, one of 7 positioned for viewing by the some 16,000 folks in attendance.

Esri has already made the Plenary videos available, and you can find them all at
http://www.esri.com/events/user-conference/agenda/plenary

Here are just a couple of the major “Coming Attractions” that we heard about on Monday.

ArcGIS Pro.  The brand-new, Excel-like ArcGIS Pro will ultimately be the replacement for the ArcGIS Desktop.  It’s 64 bit, and multithreaded, so it will be much faster, even when you have other apps open (like Office).  Pro also features the ability to save multiple layouts of a single map, so there will be no more proliferation of weighty project files when all you want is a layout.  Labeling is much easier, and better exposed in the ribbon menu.  There is also much better management of the structure and format of tables.  All in all, Pro is really what we’ve wanted all along as business users.  Something that looks and works just like Excel.

GeoPlanner.  GeoPlanner is a new ArcGIS extension that offers a slider-based, very easy-to-use approach to geodesign, providing tools that support all the steps of land-based planning, featuring a complete geo-enabled design workflow that is browser-based. We’re very excited at the possibilities of geodesign in banking.

For example, a bank could use GeoPlanner to implement strategy and designate which of several types of “branches of the future” each of their current branches will be, based on geodesign – basing the type of branch on its geographic location, the site, and the land use and land characteristics.  In other words, GeoPlanner allows us to specify thresholds for business opportunity, savings v borrowing v transaction business, key demographics, urbanicity, share of wallet etc. to define what branch type will be carved from the former branch structures, dominated by the oversized full service branches configured to do the business of the 20th, not 21st century. 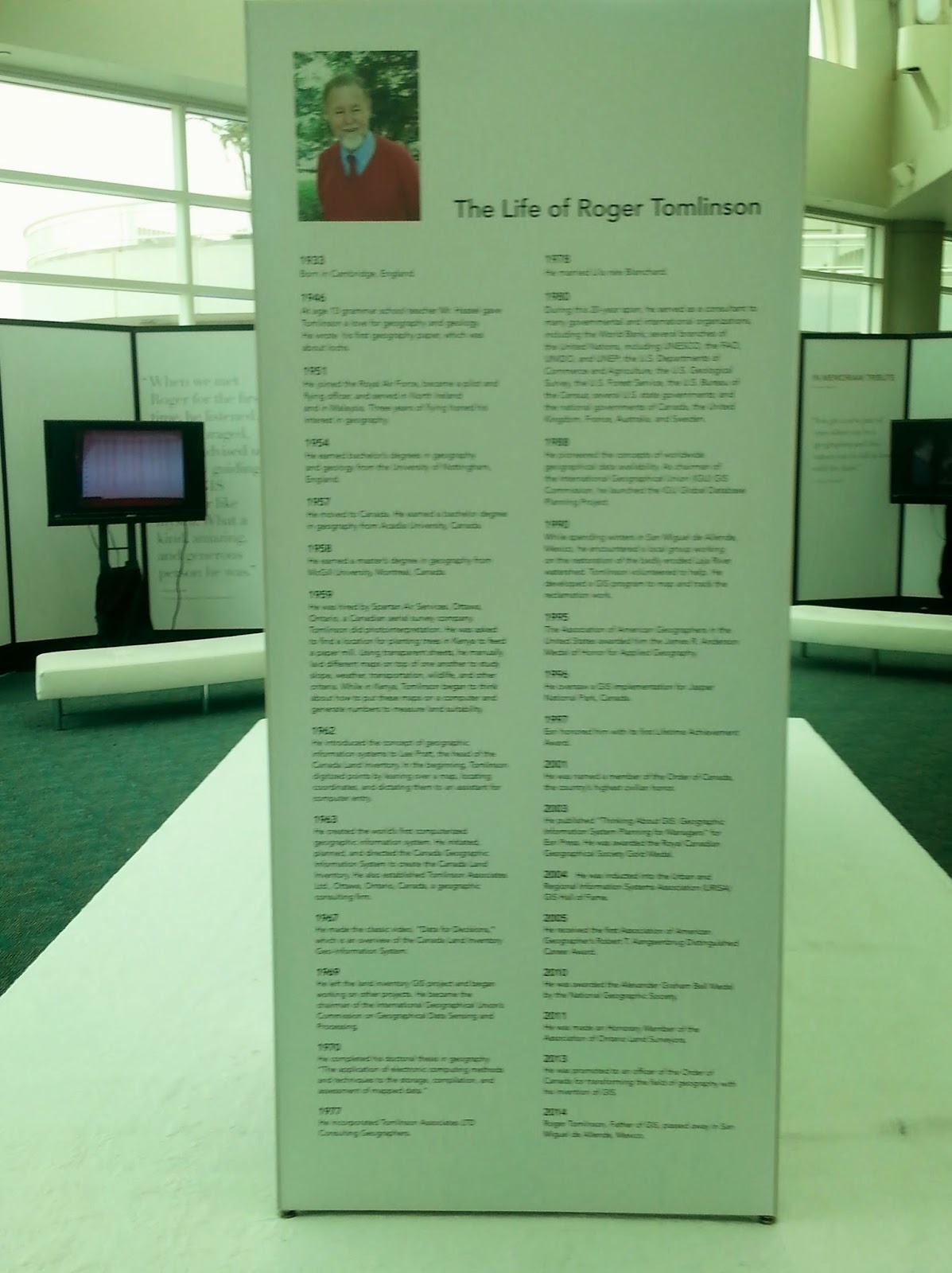 Roger Tomlinson, an Officer of the Order of Canada, was the father of GIS, and a mentor to many of us.  Roger passed away in February, and was memorialized at the conclusion of the Plenary and in a special memorial area at the UC.

Roger’s patience and encouragement of adults and kids alike who are brand new to GIS is legendary.  It's an example for us all, as we seek to make GIS more valuable for our companies and clients, internal and ultimate employees, and customers, communities and neighborhoods.

The memorial featured this note of thanks to Roger, from a person who herself is now a GIS leader.

“When we met Roger for the first time, he listened, he encouraged, and he advised us, patiently guiding even a GIS beginner like myself.” 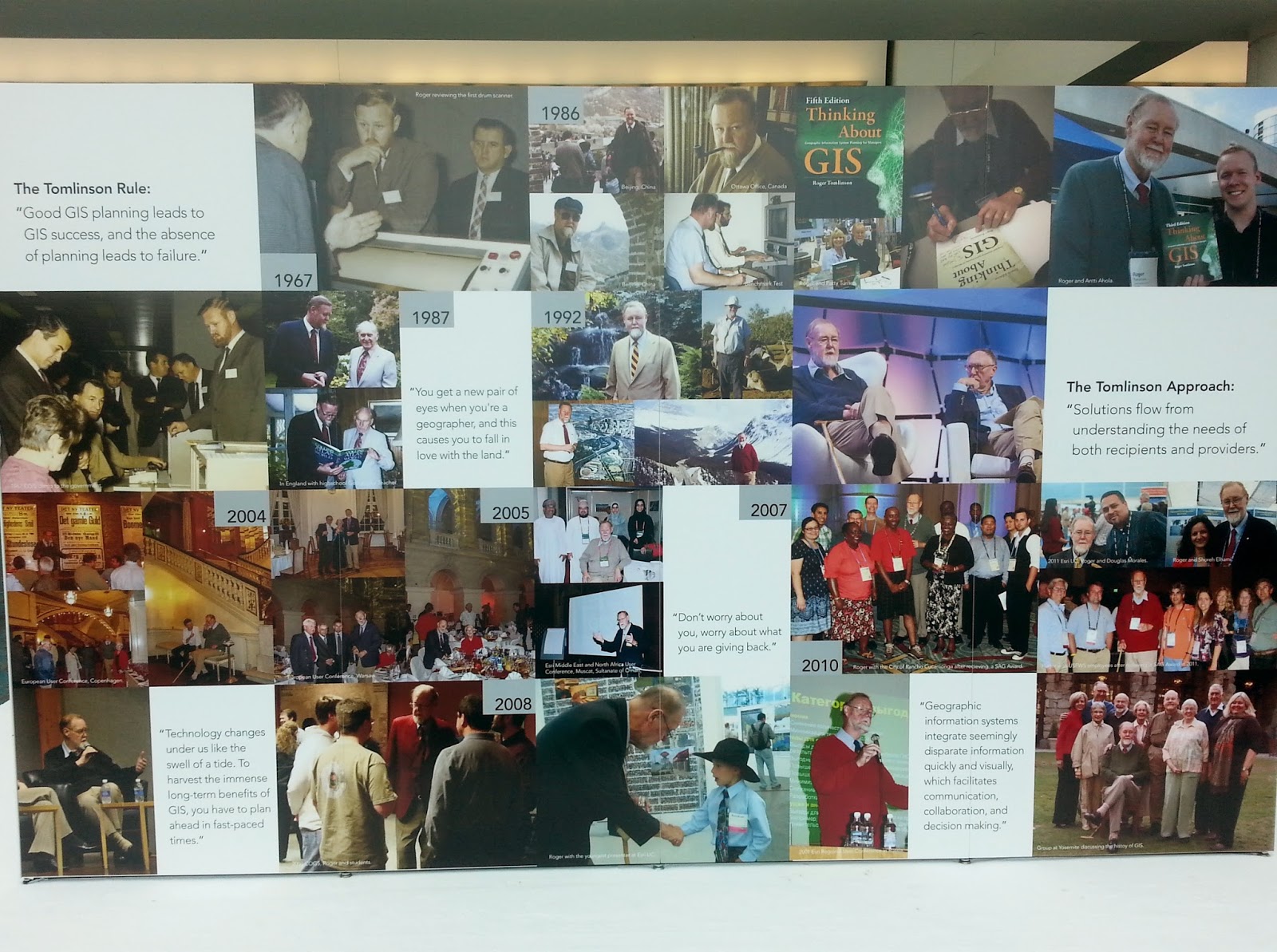 For me, Roger was a personal friend, who knew a little bit about and cared about me, and my family.  He was one of the greatest men I ever knew, and would be even if he never made a single map.  "If you must worry, worry about what you're giving back."  Roger's impact on me, on Jack Dangermond and Esri, and upon the world can't even be estimated.

Tuesday, July 15 UC and Business Summit Highlights
The Summit concluded on Tuesday during the broader UC, marking the 4th day of content relevant and/or dedicated to business geography.

Featured were a session from the Milken Institute on Payday Lending, and another presentation from Carlous Brown about GIS and retail delivery and strategy. (I also should mention that among his credentials is a background in Earth Science, which is pretty cool for a corporate planner.  Jon's original CSUN degree was in Economic Geography, that was prescient, too

Later that afternoon, the first formal Esri banking SIG convened with 86 of us in attendance, facilitated by Matt Perry and Lauri Young of Esri who did a great job of putting this together and presenting.  Conducting a live, smartphone-based interactive poll, Matt surfaced a series of questions about the adoption process and usage of GIS technology in banking. 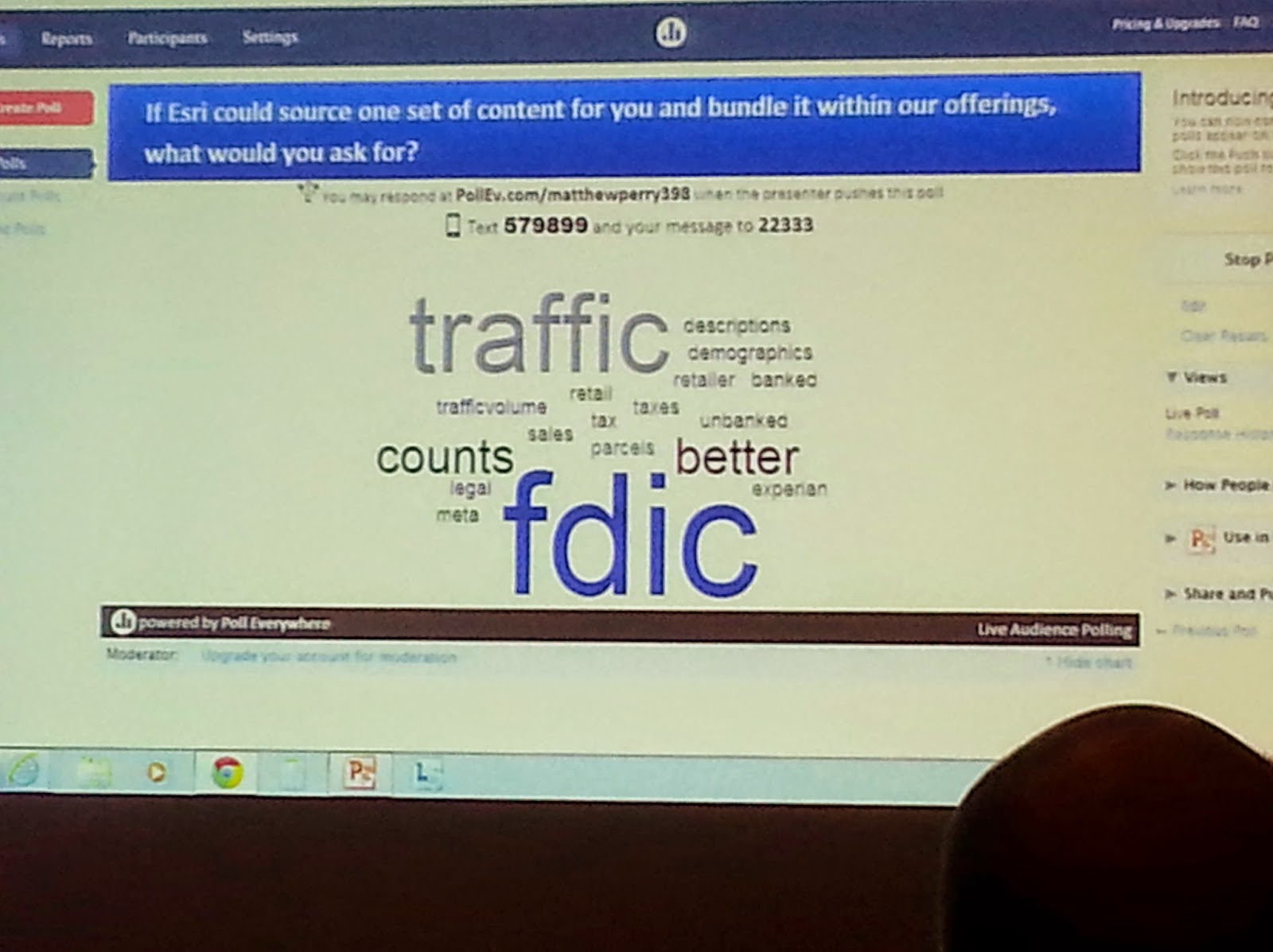 Among the SIG highlights –
·        The opportunity to support a big-money, high visibility, C-level decision with GIS and data science was what got several of the major banks started with GIS.
Conclusion
One of the most successful Business Summits was empowered by the great efforts of Simon Thompson and the Esri team, reflecting months of work and planning.

We had a real breakthrough in the Banking SIG, which we hope will flower now among more banks and credit unions, along with what has largely been the RPM, industry association, research and consulting communities.

And the best road map, daunting as it may be, came from Bank of America.  It was great fun to have senior planners from the Bank who are also geo-geeks.  And, during the SIG meeting, to have multiple GIS staff from Wells Fargo, and J.P, Morgan Chase, and several others, all in the same room, discussing maps and GIS and how to become more helpful - visible, and valuable - to our companies.
Posted by Steve Lackow at 8:10 PM