Mobile Banking for the Unbanked 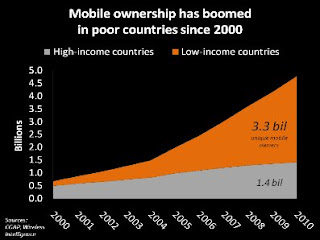 A few posts back, we suggested that mobile phones might be able to reach older consumers who never tried banking online with a PC, and don't care to, either.  But international data suggests that it is the unbanked - the poor, lowest income consumers - who might be the real beneficiaries of mobile payments. 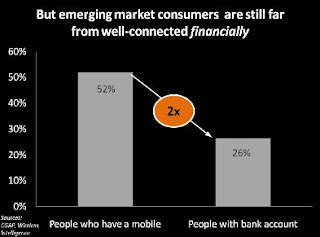 But as people in poor countries become increasingly well-connected via mobile, they remain far less well-connected financially. An emerging market consumer is more than twice as likely to own a mobile phone as to have a bank account in their name.

So, doesn't it seem like mobile phones hold a lot of promise for reaching the unbanked? 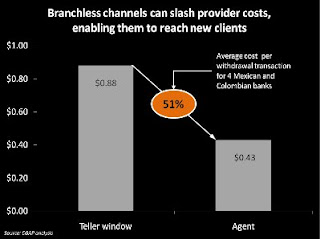 Let's also consider that banks can reap substantial cost savings from channels that replace branches with “branchless banking” (technology paired with agents, typically merchants who handle deposits and withdrawals and are connected via mobile or card-swipe POS terminals). The figure at left shows the cost reduction for 4 Mexican and Colombian banks from moving deposit transactions from teller to agent. CGAP estimates most banks will see 50% cost savings or greater. This enables them to reach low-income clients who were previously uneconomical to serve.

Now hear this - other providers — mobile operators, tech firms — which want to enter financial services for the first time can also employ agents to cost-effectively roll out.  That means that those who create the software for phones (Google), those who make the software and the phone (Apple), those who have the networks (AT&T and Verizon) and those who have competing payment networks already in place (Discover) all stand to benefit from the inability of banks and merchants to get on the same page - which they have not been able to do.  This was the case when I first developed the business case for EFTPOS at First Interstate in the early 1980's with KMPG, and since then, merchant-bank relations have decidely not improved.

No wonder this is developing outside the U.S. so much faster, where there are far fewer, far less powerful entities battling for control.